Fins – Harley Earl, the Rise of General Motors and the Glory Days of Detroit 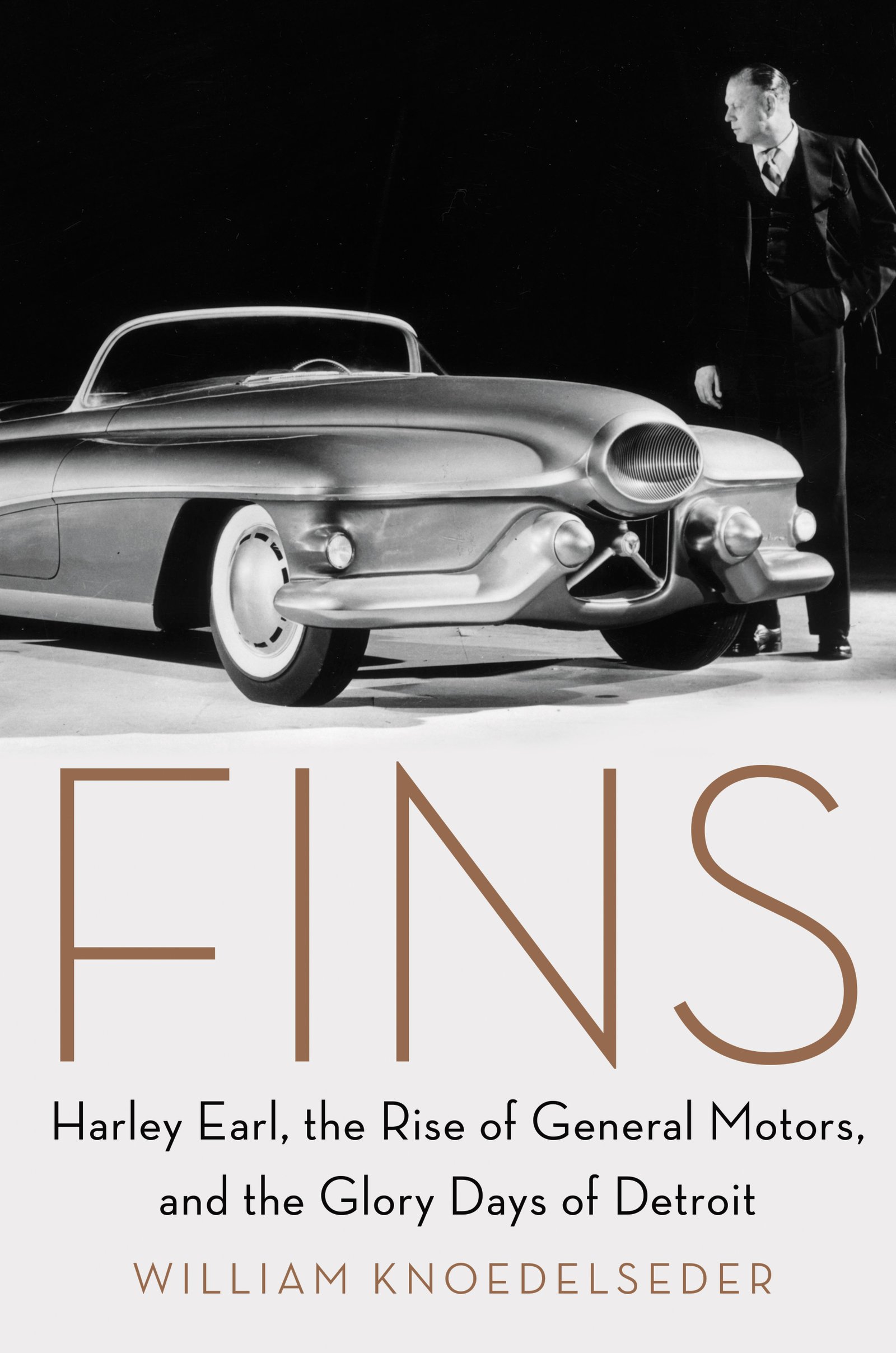 The book shows he was a genius; and the car industry wouldn't be like it is without him...

When they throw around that phrase "pioneer in the auto industry" you can hardly get more pioneering in design than Harley Earl, not only a giant in the industry in America but at 6'6" a giant of a man. America’s car industry developed differently from that in Europe, England and Japan. We got hooked early on the three-year model change, what came to be called “Planned Obsolescence” and this book is about the genius that invented that. 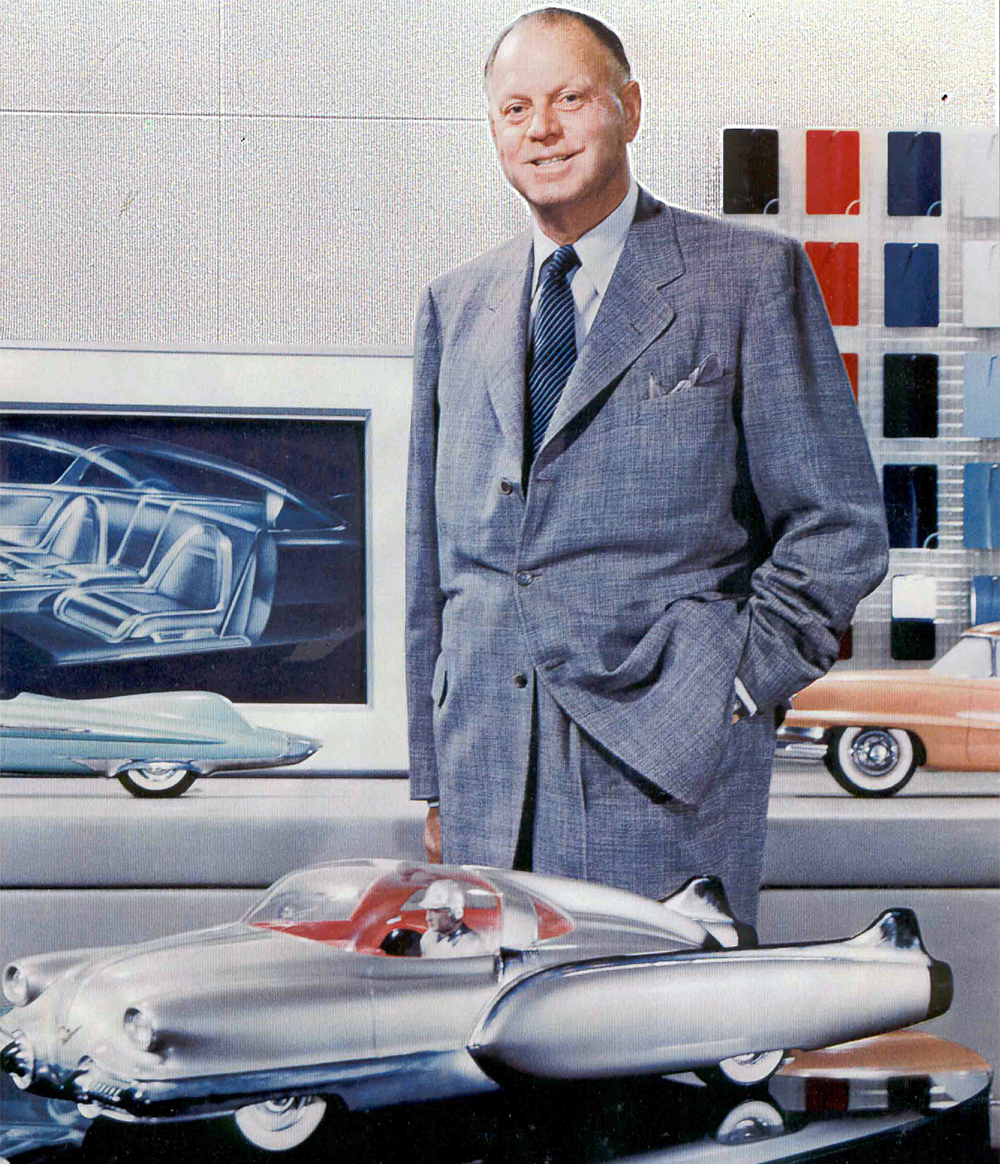 Before Earl came along, engineers developed a car and little thought was given toward making attractive shapes. Designers were thought of as "sissies" and engineers commanded the look of the product.

This book is not only about Harley Earl but there’s a good bit of Earl family history before you get to the auto business, such as how Earl’s forbearers were actual pioneers in that they came to California from the East in a covered wagon, enduring attacks by wild Indians and the like.

Earl’s first business was joining his father making custom wagons in the center of Hollywood, CA just as the movie business was born. When cars came along, he and his father would make custom cars for movie stars. Out in Detroit, they heard about him and a founder of GM, Alfred Sloan, came out, interviewed him and hired him to be GM’s first director of styling, a position which did not previously exist in Detroit. 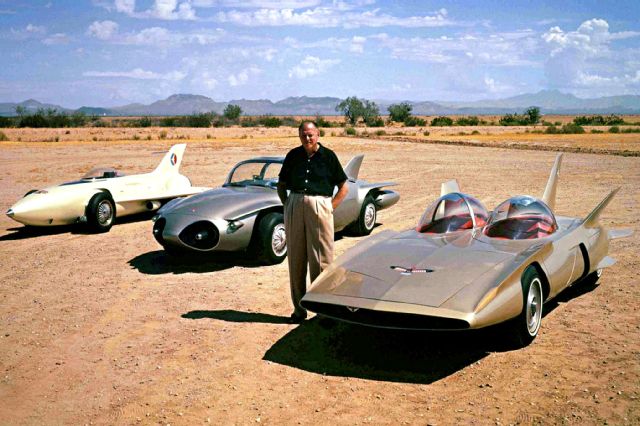 Earl liked airplanes so much, two of the three Firebrid gas turbine cars were more like planes than cars.

Of course, picking colors for cars, materials and body shapes seemed sort of “sissy” to many in the auto industry but when Earl's choices began to result in booming sales, the critics were quiet. The statistics in the book are astounding. GM quickly passed Ford because Henry Ford was still making Model T’s and still offering them in one color: black. Once GM began to offer different colors and choices in interiors, they began to dominate the American auto industry, leaving Ford in the dust.

Harley Earl comes across as a real personality. He was said to be a real martinet in clothing choices, having hung out, in the early days, with Hollywood show biz folk like Douglas Fairbanks and Tom Mix, customers for his custom cars.

The author portrays Harley Earl as an autocratic purveyor of taste, and you wonder, must all famous names in design have an ego so big in order to succeed?

One example from the book that stands out is that GM’s first styling chief – going back to 1927 – forbid any other designer from GM being mentioned in connection with styling, it was all Mr. Earl.

Still, you have to admit that Earl created car marketing as we know it in America with instituting styling changes every three years. Consumers couldn’t wait to trade in their old car to get the latest styling and I admit I was one of them, gotta have the latest because the tail fin is six inches higher, right?

It is almost humorous in the book when the author tells of designers hating some of the changes, for instance thinking the '57 Chevy had needlessly high fins. Yet, looking back from 60 plus years later the '57 seems much more well styled than the '55 and '56 models.

Earl also brought the idea of making clay models of cars, an idea he had as a child playing with mud in the riverbed. When he got to Detroit, he had full size clays made and even painted so that the cars were so realistic you thought you could open the doors and sit inside.

Another idea the author credits Earl with is the dream car, building a one-off prototype that will predict a styling trend of the future, such as a tail fin or a completely disappearing top, and seeing what excites the public, then adjusting production plans to align with what the public went for at the unveiling of the concept car. He would create these dream cars, and unveil them in a traveling road show (with leggy showgirls) called Motoramas, held in cities around the country.

Then he would drive the show cars himself after their show career, such as the million dollar LeSabre. Sometimes he would even (egad!) give a show car away to a pal or one time to a show biz femme named Marie “The body” MacDonald (wonder what his wife thought of that gift…?).

Earl was inspired to add tailfins by a peak at a WWII fighter, like this the LeSabre.

It detracts a little from the legend when you read here of Earl’s capriciousness, such as his penchant for firing people on the spot, usually because they questioned his judgement or dared to change a clay model without his approval. Maybe that’s the sign of a good biographer – he or she lays out the facts for the readers to judge. The author never condemns Earl for his dominating ego and rage over anyone that contradicted him. That makes me wonder if more of the geniuses lauded in different fields had similar traits and that's why we remember them, not knowing they were hell to work for.

Knoedelseder depicts Earl as totally opposed to smaller cars, his objective the first few decades as longer, lower, wider. But you have to remember gasoline was under one dollar a gallon back then so you didn't mind that your car only got 12 mpg. When I published a previous review on this book, a former GM designer wrote how he was fired for, with another employee, suggesting a smaller car, with an aluminum engine. This was heresy to Earl, yet ironically in 1962 GM did just that: they came out with the Buick Special with an aluminum B8 small block.

It is interesting when he shows the gradual erosion of power by Earl when a subordinate, Chuck Jordan, found a storage yard of ‘57 Chryslers and realized Chrysler had gone big on fins. The way Knoedelseder describes it, while Earl was away in Europe, Jordan started a whole new trend in design, an alternate reality so to speak so that when Earl came back he was shown the regular designs and then the alternate ones and agreed to go more aggressively toward meeting the challenge from Chrysler. The ’59 Caddy tail fins were the tallest on any American car, sort of the swan song of Earl’s power.

The author does mention Earl went over to the European auto shows, and I remember seeing pictures of Earl and Mitchell at a major show, but doesn't mention that frequently Earl would buy a European car and spirit it over to Warren, Michigan to inspire the troops. For instance one story not told in this book was when Earl had a D-type racing Jaguar and they briefly considered putting it under the Corvette SS dream car body for its debut at Sebring. Instead they removed the body form a 300SL and copied the tubular space frame but the car lasted only 23 laps into the race.

The rest of the book shows him dwindling in power, but ironically he had chosen in Bill Mitchell a man who could imitate his every move, even sartorially. I knew Mitchell and it’s amusing to read about Earl because Mitchell had many of the same mannerisms and penchants, such as driving the dream cars to work and back. (There is a book on Mitchell which I will try to obtain to review). 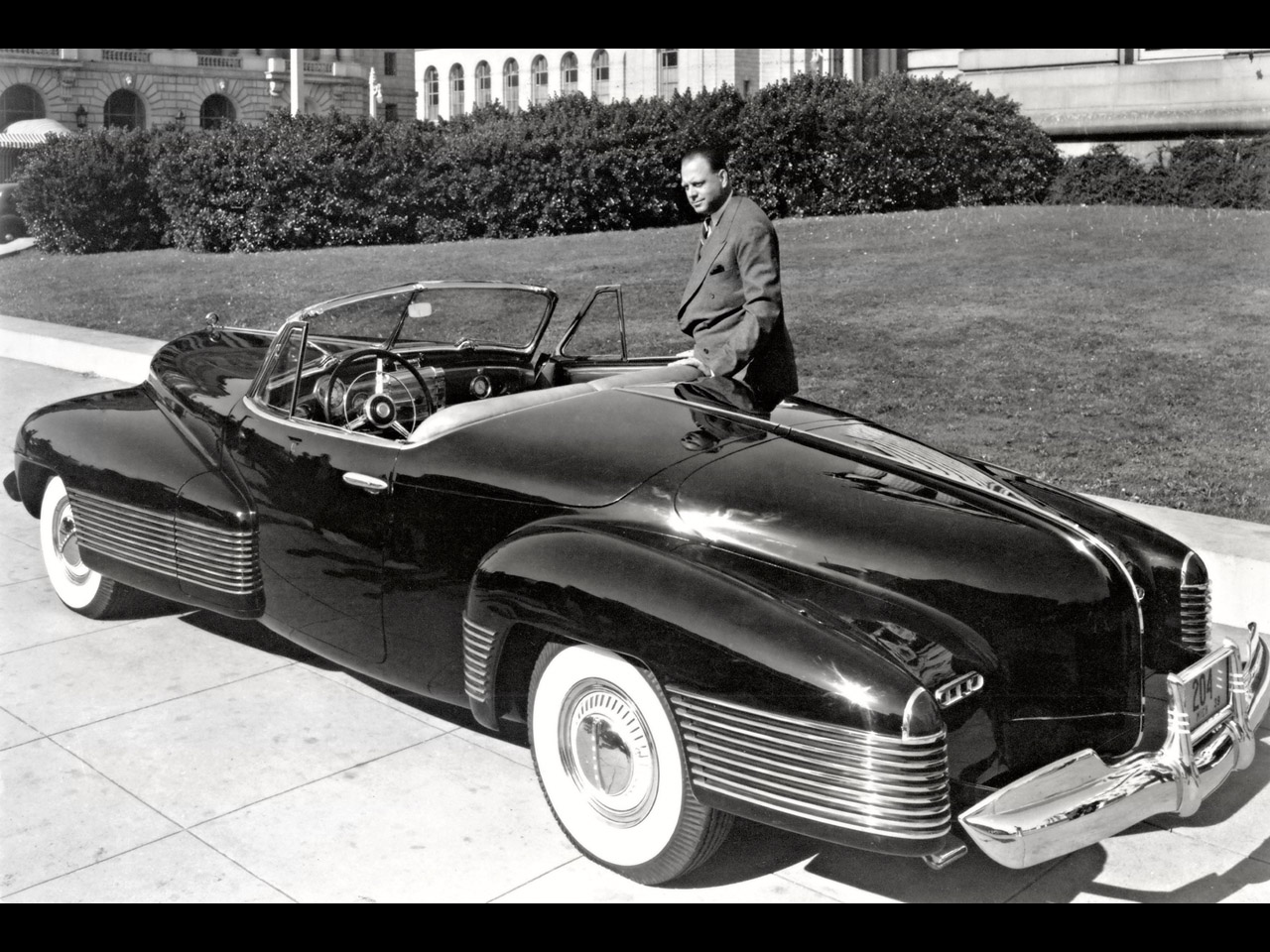 Earl with the prewar Y-job, his first modern dream car for GM.

Going back to the personalities, as I read to the end, I was still wondering if it is a necessity for big names in any field like Earl to be such a sonovabitch toward his subordinates, suppressing them so he seems ever more the genius. Memories of Steve Jobs of Apple Computers come to mind.

But the comparison I make between Jobs and Earl I think is valid because laptop computers would not look like they do if it weren’t for Steve Jobs being so intent on the looks of his devices. There is one famous story where a subordinate worked on a hand held computer or phone for many months but when Jobs pushed his finger down on a key and it didn't have the right feel, he threw it against the wall. Despite his personality flaws, I say he advanced the desirability of laptops and desktop computers ten years ahead of where it would have been without him and his relentless badgering of employees.

So it was with Earl. He discovered the basis for consumer demand and milked it to the max. As an American I see looking back that we are still, in America, a society, tuned to wanting to see next year’s models. Maybe if we as car buyers were more mature–we would wait to buy a new car only after new models showed technical advances (such as more autonomous modes leading to full autonomous driving ) but Harley got us hooked on tiny incremental design changes just as women for decades were slavishly devoted toward changing half their wardrobe if the clothing designers dictated hemlines were up or down a few inches.

The book has few pictures, hardly what you would expect for the price, not even a single color picture in a book describing how color was used to sell cars. But on the other hand, it’s an all encompassing story, showing how the car market was created in America by building what people want. After, of course first educating them on what was possible. 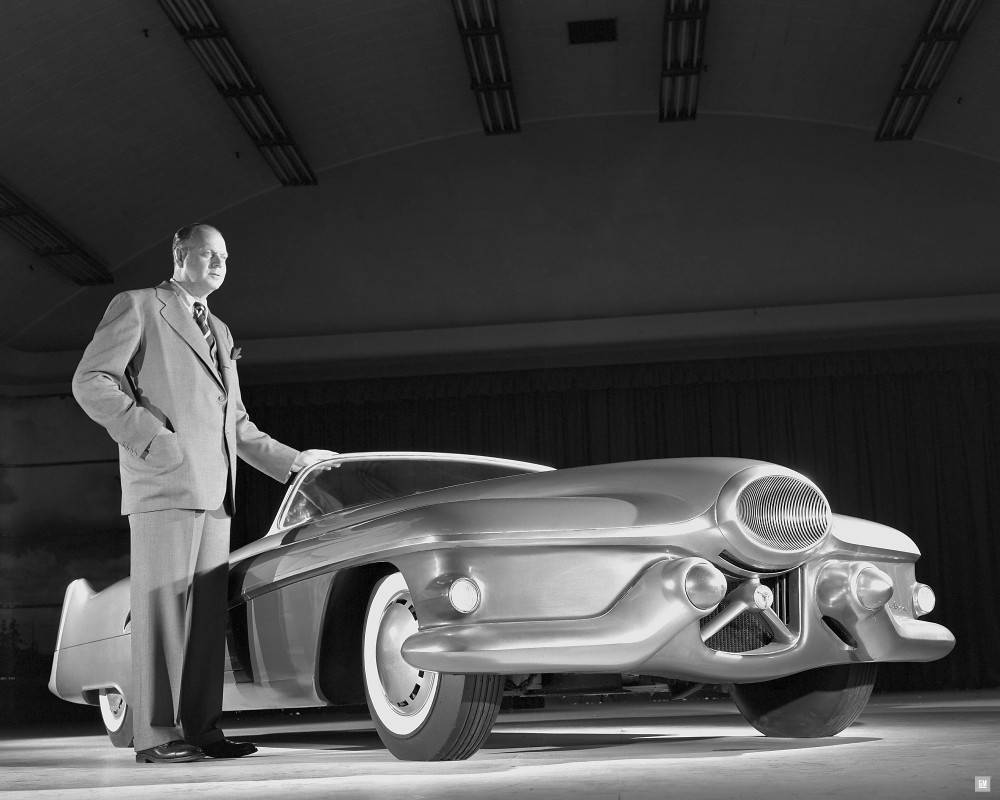 Harley Earl was the bandleader of the styling bandwagon that continues powering much of the auto industry. I dare say that even the European and Asian automakers learned from him how to use frequent design changes, color changes and interior changes to sell cars. He was the bandleader, and though intellectually we like to tell ourselves that we are not held sway to a slight difference in hood length or fender shape, there are huge shifts in the car market based on such trivialities. We're all still swayed by the tunes that Harley wrote..

THE AUTHOR/ARTIST: Wallace Wyss is the author of 18 automotive histories. As a fine artist, he is currently painting portraits on commission of collector cars. For a lists of prints available  of his completed portraits, readers are invited to contact him at This email address is being protected from spambots. You need JavaScript enabled to view it.. 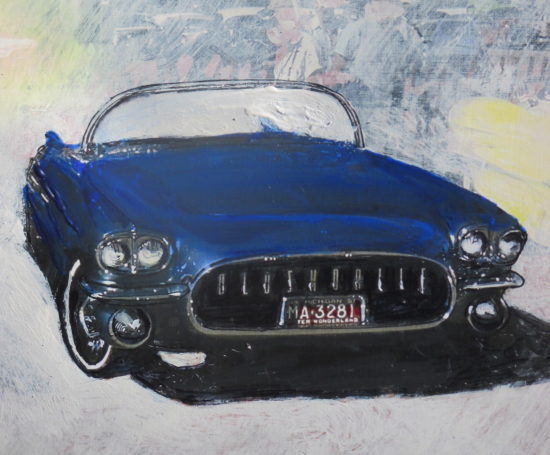 This Oldsmobile F88 Mk/ III painting by Wallace Wyss shows the last dream car
that Earl had built; and he even took it with him to retirement. The car is now missing,
though it was thought returned to GM after it was sent from Palm Beach,
Earl's retirement home, back to Warren, MI too many times to fix the retractable top.

We have 7983 visitors online