Sir Alexander Arnold Constantine Issigonis CBE, FRS, RDI (18 November 1906 – 2 October 1988) was a British designer of cars, widely noted for the groundbreaking and influential development of the Mini, launched by the British Motor Corporation (BMC) in 1959.

The machine factory (shown here in a company letter of 1910) founded by Demosthenis Issigonis, Alec's grandfather, once a thriving Greek businesses in Smyrna (now Izmir).

Issigonis was born in 1906 into the Greek cosmopolitan community of the Greek port Smyrna (now İzmir, Turkey) in Asia Minor, born from Greek and German parents he inherited British citizenship via his father and developed very "English" attitudes. His grandfather Demosthenis Issigonis migrated to Smyrna from Paros in Greece in the 1830s and through the work he did for the British-built Smyrna-Aydın Railway, in the engineering works that he had established, had managed to acquire British nationality. Demosthenis's son (Alec's father) Constantine Issigonis (Greek: Κωνσταντίνος Ισηγόνης), was born, with British nationality, in Smyrna in 1872. Constantine studied in England. Alec's mother, Hulda Prokopp, could trace her origins back to Württemberg (now part of Germany). It was through his mother's kinships that Issigonis was a first cousin once removed to BMW (and more briefly Volkswagen) director Bernd Pischetsrieder.

Because Alec and his parents were British subjects, they were evacuated to Malta by British Royal Marines in September 1922, ahead of the Great Fire of Smyrna and the Turkish re-possession of Smyrna at the end of the Greco-Turkish War (1919–1922). Following the death of his father in 1922, Alec and his mother moved to the UK in 1923. Alec studied engineering at Battersea Polytechnic in London. He failed his mathematics exams three times and subsequently called pure mathematics 'the enemy of every creative genius'. After Battersea Polytechnic, Alec decided to enter the University of London External Programme to complete his university education.

Issigonis went into the motor industry as an engineer and designer working for Humber and competed successfully in motor racing during the 1930s and 1940s. Starting around 1930, he raced a supercharged "Ulster" Austin Seven, later fitting it with a front axle of his own design, leading to employment at Austin. This greatly modified machine was replaced with a radical special completed in 1939, constructed of plywood laminated in aluminium sheeting. The suspension was also of advanced design, with trailing arm front suspension attached to a steel cross-member, and swing axle rear, all with rubber springs made of catapult elastic. This car was remarkably light, weighing 587 lb, of which the engine contributed 252 lb. By the time the chassis had been completed (hard labour—it was all done by hand, no power tools), Issigonis had moved to Morris Motors LImited, but Austin supplied a "works" specification supercharged side-valve engine. Issigonis usually won, even when entered in the 1100cc class if there was no 750cc category. Most events entered were sprints, but he also raced at circuits.

The Mini as a British icon

In 1936, he moved to Morris Motors Limited at Cowley working on an independent front suspension system for the Morris 10. The war prevented this design from going into production but it was later used on the MG Y-type. He worked on various projects for Morris through the war and towards its end started work on an advanced post war car codenamed Mosquito that became the Morris Minor, which was produced from 1948 until 1971. In 1952, just as BMC was formed by the merger of Morris and Austin, he moved to Alvis Cars where he designed an advanced saloon with all-aluminium V-8 engine, and experimented with interconnected independent suspension systems. This prototype was never manufactured because its cost was beyond Alvis's resources.

At the end of 1955, Issigonis was recruited back into BMC, this time into the Austin plant at Longbridge, by its chairman Sir Leonard Lord, to design a new model family of three cars. The XC (experimental car) code names assigned for the new cars were XC/9001, for a large comfortable car, XC/9002, for a medium-sized family car, and XC/9003, for a small town car. During 1956 Issigonis concentrated on the larger two cars, producing several prototypes for testing.

However, at the end of 1956, following fuel rationing brought about by the Suez Crisis, Issigonis was ordered by Lord to bring the smaller car, XC/9003, to production as quickly as possible. By early 1957, prototypes were running, and by mid-1957 the project was given an official drawing office project number (ADO15) so that the thousands of drawings required for production could be produced. In August 1959 the car was launched as the Morris Mini Minor and the Austin Seven, which soon became known as the Austin Mini. In later years, the car would become known simply as the Mini. Due to time pressures, the interconnected suspension system that Issigonis had planned for the car was replaced by an equally novel, but cruder, rubber cone system designed by Alex Moulton. The Mini went on to become the best selling British car in history with a production run of 5.3 million cars. This ground-breaking design, with its front wheel drive, transverse engine, sump gearbox, 10-inch wheels, and phenomenal space efficiency, was still being manufactured in 2000 and has been the inspiration for almost all small front-wheel drive cars produced since the early 1960s.

In 1961, with the Mini gaining popularity, Issigonis was promoted to Technical Director of BMC. He continued to be responsible for his original XC projects. XC/9002 became ADO16 and was launched as the Morris 1100 with the Hydrolastic interconnected suspension system in August 1962. XC/9001 became ADO17 and was launched, also with the Hydrolastic suspension system, as the Austin 1800 in October 1964.The same principle was carried over for his next production car the Austin Maxi, However, by then he had become more aware of the cost considerations of vehicle manufacture and in service warranty costs which were crippling BMC. It certainly appeared by the Maxi development era that Issigonis wanted to "do his own thing" as cost cutting and development costs spiraled. He would instead research work on his Mini replacement the 9X with its compact transverse engine. With the creation of British Leyland in 1969, new chairman Lord Stokes quickly sidelined Issigonis and made him into what was termed "Special Developments Director", replacing him with Harry Webster as the new Technical Director (Small/Medium cars). Stokes was heard on his appointment to say: "We'll sharp sort this bloke Issigonis out!". 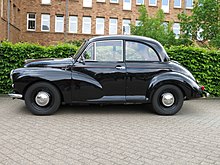 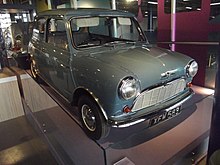 Issigonis, nicknamed "the Greek god" by his contemporaries, was elected as a Fellow of the Royal Society in 1967 and was awarded a knighthood in 1969. Whilst he is most famous for his creation of the Mini, he was most proud of his participation in the design of the Morris Minor. He considered it to be a vehicle that combined many of the luxuries and conveniences of a good motor car with a price suitable for the working classes - in contrast to the Mini which was a spartan mode of conveyance with everything cut to the bone. Interestingly Issigonis often commented to friends and colleagues that the Austin 1800 (ADO17) was the design he was most proud of, even though it never was as commercially successful as his three preceding designs.

Sir Alec officially retired from the motor industry in 1971, although he continued working until shortly before his death. 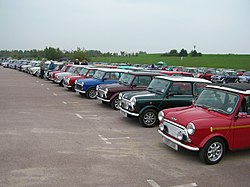 Some of the Minis at the Issigonis centenary rally

He died in 1988 at his house in Edgbaston, Birmingham, and was cremated at the Lodge Hill Crematorium in nearby Selly Oak.

On 15 October 2006 a rally was held at the Heritage Motor Centre in Gaydon, England, to celebrate the centenary of Sir Alec's birth.

There is a road named "Alec Issigonis Way" in Oxford Business Park on the former site of the Morris Motors factory in Cowley, Oxford.

We have 5989 visitors online