Harley J. Earl (November 22, 1893 – April 10, 1969) was the initial designated head of Design at General Motors, later becoming Vice President, the first top executive ever appointed in Design of a major corporation in American history. He was an industrial designer and a pioneer of modern transportation design. A coachbuilder by trade, Earl pioneered the use of freeform sketching and hand sculpted clay models as automotive design techniques. He subsequently introduced the "concept car" as both a tool for the design process and a clever marketing device.

Earl's Buick Y-Job was the first concept car. He started "Project Opel", which eventually became the Chevrolet Corvette, and he authorized the introduction of the tailfin to automotive styling. During World War II, he was an active contributor to the Allies' research and development program in advancing the effectiveness of camouflage.

Harley Earl was born in Hollywood, California. His father, J. W. Earl, began work as a coachbuilder in 1889. The senior Earl eventually changed his practice from horse-drawn vehicles to custom bodies and customized parts and accessories for automobiles, founding Earl Automobile Works in 1908.

Earl began studies at Stanford University, but left prematurely to work with, and learn from, his father at Earl Automotive Works. By this time, the shop was building custom bodies for Hollywood movie stars, including Roscoe "Fatty" Arbuckle and Tom Mix.

Lawrence P. Fisher, general manager of the Cadillac division, was visiting Cadillac dealers and distributors around the country, including Lee. Fisher met Earl at Lee's dealership and observed him at work. Fisher, whose automotive career began with coachbuilder Fisher Body, was impressed with Earl's designs and methods, including the use of modeling clay to develop the forms of his designs.

Fisher commissioned Earl to design the 1927 LaSalle for Cadillac's companion marque. The success of the LaSalle convinced General Motors president Alfred P. Sloan to create the Art and Color Section of General Motors, and to name Earl as its first director.

Prior to the establishment of the Art and Color Section, American automobile manufacturers did not assign any great importance to the appearance of automobile bodies. Volume manufacturers built bodies designed by engineers guided only by functionality and cost. Many luxury-car manufacturers, including GM, did not make bodies at all, opting instead to ship chassis assemblies to a coachbuilder of the buyer's choice.

The executives at General Motors at the time, including engineers, division heads, and sales executives, viewed Earl's conceptual ideas as flamboyant and unfounded. Earl struggled to legitimize his design approach against the tradition- and production-oriented executives. As head of the newly formed Art and Color Section in 1927, he was initially referred to as one of the "pretty picture boys", and his Design Studio as being the "Beauty Parlor".

In 1937, the Art and Color Section was renamed the Styling Section. Sloan eventually promoted Earl all the way to the vice president level, making him (to Sloan's knowledge) the first styling person to be a VP at a large corporation.

Harley Earl and Alfred P. Sloan implemented "Dynamic Obsolescence" (essentially synonymous with planned obsolescence) and the "Annual Model Change" (tying model identity to a specific year) to further position design as an engine for the company's product success. These ideas are largely taken for granted today but were unusual at the time. 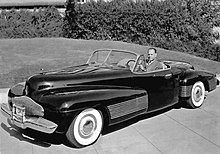 Harley Earl and the Buick Y-Job

In 1939, the Styling Division, under Earl's instruction, styled and built the Buick Y-Job, the motor industry's first concept car. While many one-off custom automobiles had been made before, the Y-job was the first car built by a mass manufacturer for the sole purpose of determining the public's reaction to new design ideas. After being shown to the public, the Y-job became Earl's daily driver.

In 1942, during WWII, Earl established a camouflage research and training division at General Motors, one consequence of which was a 22-page document called Camouflage Manual for General Motors Camouflage. A decade before, two former WWI camouflage artists, Harold Ledyard Towle (a U.S. Army camoufleur) and McClelland Barclay (who created the Fisher Body ads, and contributed to U.S. Navy camouflage during both World Wars) had worked as designers at General Motors. Among Earl's apprentices was English designer David Jones, who worked at its British division at Vauxhall Motors, who served in the camouflage section of the Royal Engineers during WWII.

Harley Earl authorized the Frank Hershey design for the 1948 Cadillac, which incorporated the first automotive tailfin. Inspiration for the fins came from the Lockheed P-38 Lightning. But it extended beyond the war, during the age when space rockets captured the popular imagination (1950s and 1960s). The style caught on throughout Detroit and eventually led to competition between Harley Earl and his counterpart at Chrysler, Virgil Exner, over the size and complexity of tailfins, culminating with those on the 1959 Cadillac models.

Influenced by the English and European sports cars being raced on road racing circuits after World War II, Earl decided that General Motors needed to make a sports car. Design work on "Project Opel" began as a secret project. He first offered the project to Chevrolet general manager Ed Cole. Cole accepted the project without hesitation, and the car was offered to the public in 1953 as the Chevrolet Corvette.

Harley Earl retired from General Motors in 1958 after overseeing the design of the 1959 models. He was succeeded as vice-president with responsibility for the Design and Styling Department by Bill Mitchell, under whose leadership GM design became less ornamental.

Before Earl retired, General Motors became the largest corporation in the world, and design was acknowledged as the leading sales factor within the automotive industry.

He is remembered as the first styling chief in the US automobile industry, the originator of clay modeling of automotive designs, the wraparound windshield, the hardtop sedan, factory two-tone paint, and tail-fins. He said in 1954, "My primary purpose for twenty-eight years has been to lengthen and lower the American automobile, at times in reality and always at least in appearance." The extremely low and long American cars of the 1960s and 1970s show the extent to which Earl influenced an entire industry and culture.

He was inducted into the Automotive Hall of Fame in 1986.

One of his concept car designs, the turbine-powered Firebird I, is reproduced in miniature on the Harley J. Earl Trophy, which goes to the winner of the season-opening Daytona 500 NASCAR race.

Harley Earl was used in a brief advertising campaign for Buick, particularly during its reconstruction period between 2001 and 2002. Actor John Diehl, portraying Earl (or his ghost) was used to symbolize the importance of design in Buick's cars, or as the ads put it, the "Spirit of American Style". A fedora was often used as an Earl icon in these advertisements despite photos of Earl wearing a hat being uncommon.

In a December 1999 special section in the Detroit Free Press, Earl was ranked the third most significant Michigan artist of the 20th century, behind Aretha Franklin and Stevie Wonder.